Lovotics refers to the research of human-to-robot relationship. These relationships offer new possibilities for exploring the concept and possibilities of human love. After industrial, service and social robots, Lovotics introduces a new generation of robots, with the ability to love and be loved by humans.

Lovotics is proposed by Dr Hooman Samani,  Senior Lecturer in Robotics and AI at the University of Hertfordshire, UK.

The first step in Lovotics is to develop a deep understanding of the physics, physiology and emotions of the human being in order to model this in the robot. Even though various fields have proposed ideas about the role and function of love, the current understanding about love is still quite limited. Furthermore, developing an affection system similar to that of the human being presents considerable technological challenges.

The novel advanced artificial intelligence system of Lovotics includes an Artificial Endocrine System (based on physiology of love), Probabilistic Love Assembly (based on psychology of love) and Affective State Transition (based on emotions) modules.

A wealth of information about a person’s emotions and state of mind can be drawn from facial expressions, voice, gesture, etc.  The affective system of the robot analyzes system inputs to generate suitable states and behaviors for the robot in real-time. The affective system is modeled as closely to the human being as possible in order to be an emotionally engaging system.

The Lovotics robot is an active participant in the communication process and adjusts its internal hormonal levels, probabilistic love parameters and affective states depending on inputs and feedback from the human in long term.

Kissenger, Mini-Surrogate and XOXO are applications of Lovotics. Lovotics has been featured in media such as Reuters, CBS News and more. 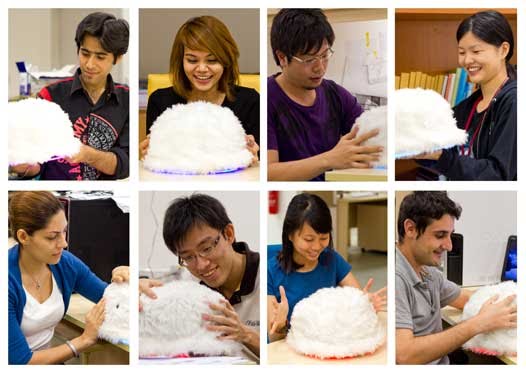